There’s going to be an impressive Salute from the Shore Military Flyover on the 4th of July. Turn your eyes to the eastern sky to wave to the F-16s of the 77th Fighter Squadron. "The Gamblers" of the 20th Fighter Wing stationed at Shaw Air Force Base will conduct the flyover of the South Carolina Coast. Listen to the sound of freedom as the F-16s roar along our shoreline. Spectators are encouraged to wear and wave the red, white and blue. The flyover is organized by the non-profit organization, Salute from the Shore, and the Town of Pawleys Island, is a tribute to our Armed Forces deployed around the world. The 19th Annual North Myrtle Beach Fireworks display at the Cherry Grove Fishing Pier is scheduled for 9:30 pm on Wednesday, July 4th. The Myrtle Beach 4th of July fireworks show will be held at 10:15 p.m. Wednesday at Barefoot Landing. 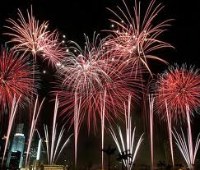 Head to Surfside Beach for a Fourth of July Celebration that promises loads of fun for the whole family. The Independence Day Celebration will be held from 6-10 p.m. Wednesday, July 4 at 13 North Ocean Blvd. Don’t miss Murrells Inlet’s 4th of July 29th Annual Boat Parade & Fireworks Display. The Boat Parade kicks off at 10 a.m. (high tide) from Garden City Point. The parade will head over to the Murrells Inlet Marshwalk and then follow the Murrells Inlet shoreline down to the Hot Fish Club. The fireworks show, which is shot off from the end of the Veterans Pier, is scheduled to start at 10:00 p.m.